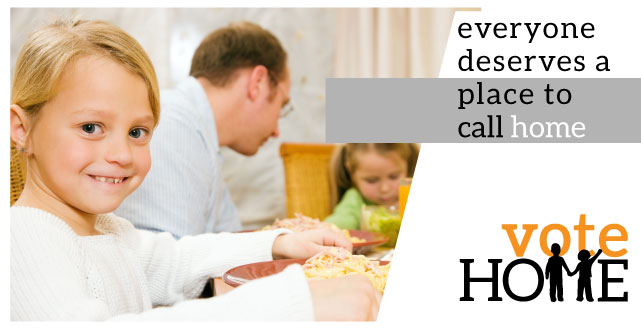 We’ve all seen the news: stories about rapidly rising house costs and rentals, and calls for the government to cut taxes that favour investment in housing over people having access to affordable homes.
The great Australian dream is more than a dream about home ownership. It’s about ensuring everyone has a place to call home. Yet every night, more than 105,000 Australians don’t have a place to call home. That’s one in every 200 people. And one in every ten households pay so much for their housing, they are forced into financial hardship.
So this election, we’re doing something about it. Vote Home is a campaign developed by a national alliance of peak housing, homelessness and welfare organisations – National Shelter, Homelessness Australia, Community Housing Industry Assocn., and Australian Council of Social Services. Shelter Tas has joined this alliance to build a movement of Australians declaring that their vote this election is a Vote Home.

A Vote Home is a vote for a national strategy to address housing affordability and a vote for all political parties to commit to end the housing crisis by 2025. Whether it’s housing prices, the high cost of rents, the shortage of public and community housing, or programs to end homelessness, everyone deserves access to a place to call home.

Will you join us?

You can support the Vote Home campaign by signing the online petition at change.org/votehome_petition or making a donation if you wish.

There are also 2 documents which outline the campaign platform –5 reforms to deliver more affordable housing and end homelessness, and a summary document – and the campaign’s media release.

Keep an eye on social media and updates from Shelter Tas throughout the lead-up to the federal election to stay up-to-date with the Vote Home campaign.

With your support and enough political will, we can end both homelessness and the housing crisis!

– With thanks to NSW Federation of Housing Associations –